Patience.  Not a word I would use to describe myself when it comes to projects.

My husband would agree.  🙂

Imagine my surprise when I cut into it and realized it was pure gorgeous walnut. 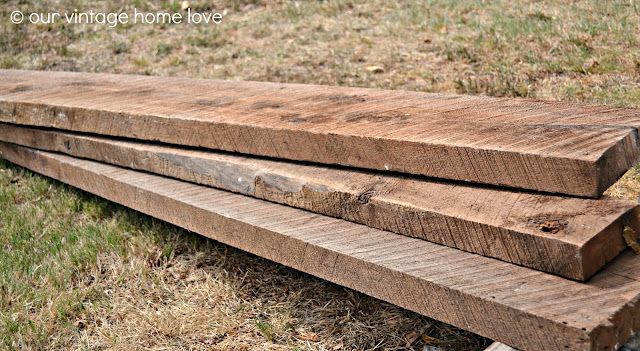 Well, my hubby and middle son went out of town this past weekend for a sports event and I decided I was going to get to work on the project I had in mind while they were away

so I could surprise him when they returned.  The walnut discovery had me so excited,
I just couldn’t wait to get started.

Silly me thought it would be something I could easily tackle myself.
Wrong. 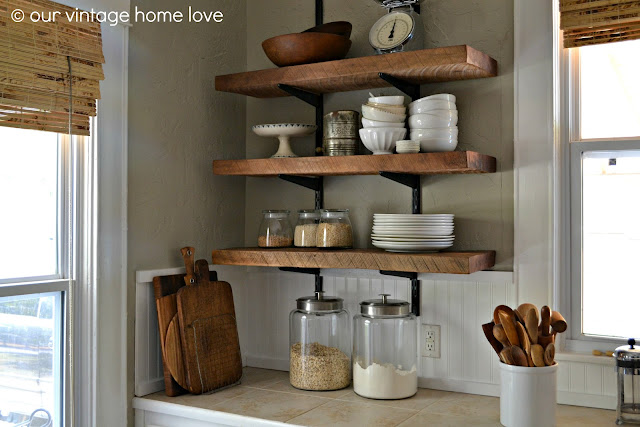 While I show you pictures of the finished project, you should know that getting to that point was somewhat of a nightmare.

For starters, I couldn’t get the previous cabinet off the wall.  So, I had to call in a neighbor to help out with that after I fell off the counter.  Because the wood is so extremely heavy,
I really had no idea what kind of brackets to use. 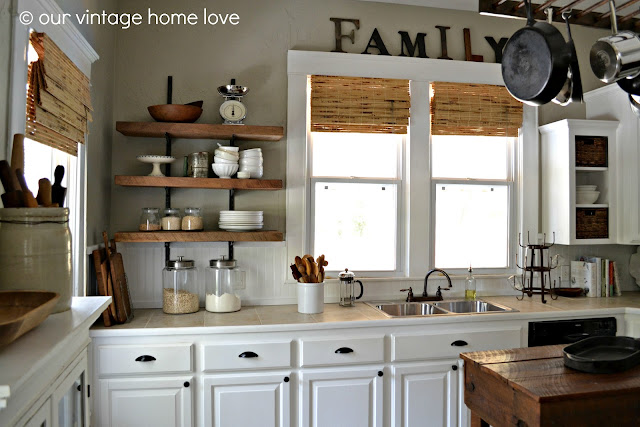 When I finally decided on the track system with brackets, only because of the amount of weight it could hold, I couldn’t get them screwed into the studs.  It wasn’t that I couldn’t find the studs, I could thanks to the previous cabinet.  It was that I wasn’t strong enough and happen to have a bad habit, to which my hubby can attest, of stripping screws when I have difficulty getting them into studs.  And because of my precarious position of standing on a countertop, I simply couldn’t get a good grip. 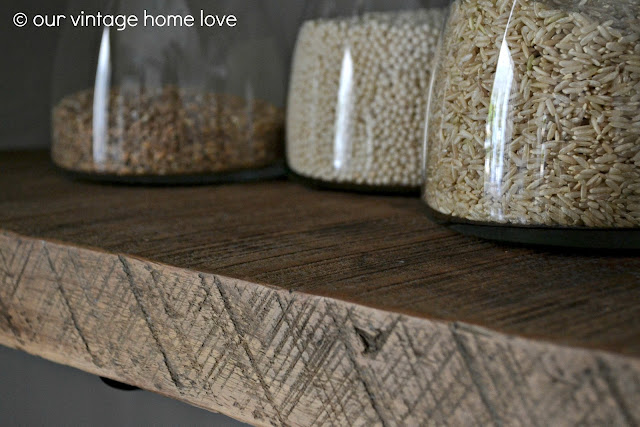 But, I was determined.   And I really wanted to have it finished before my hubby and son got home.  They had had a lot of car trouble in desert heat while traveling 5 hours and the last thing I wanted was for him to have to come home to fix what I started.
And Sunday was my first born’s 20th birthday.
I wanted to get it finished so I could concentrate on making his day special. 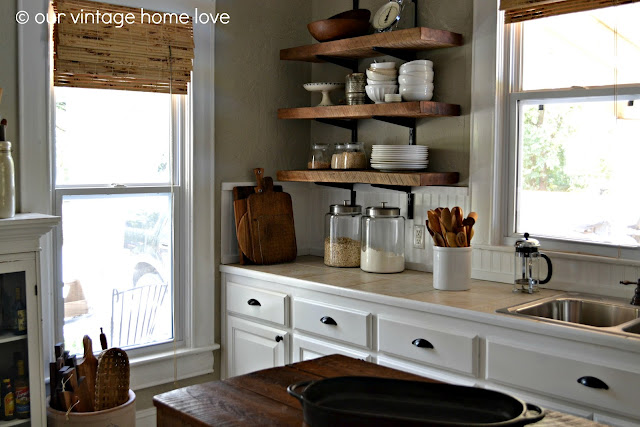 I finished up around 2 a.m. the morning my family was supposed to return and just in time for my oldest son’s birthday celebration.  The look on their faces and the “wow” and big smile that came out of my hubby’s mouth made all of the frustration totally worth it. 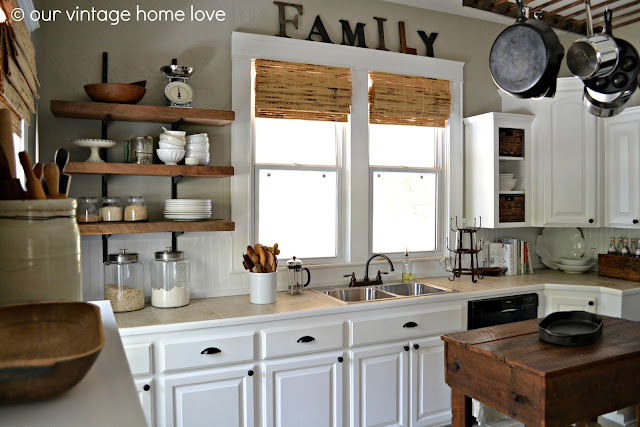 This is definitely a two person job.   And I did have a little helper.  Our youngest, who made me laugh every time I wanted to toss the shelves into the trash.  🙂 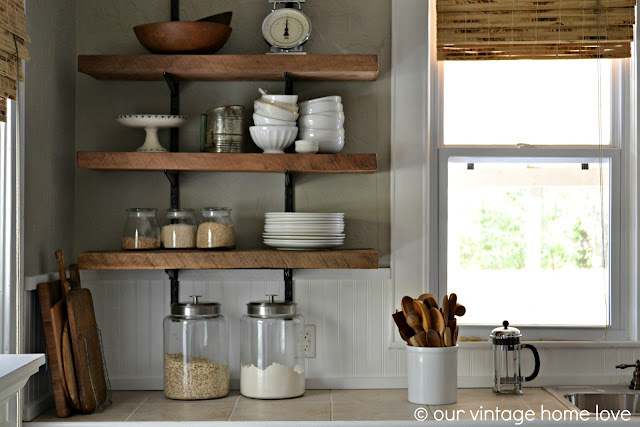 Would I do this project again? 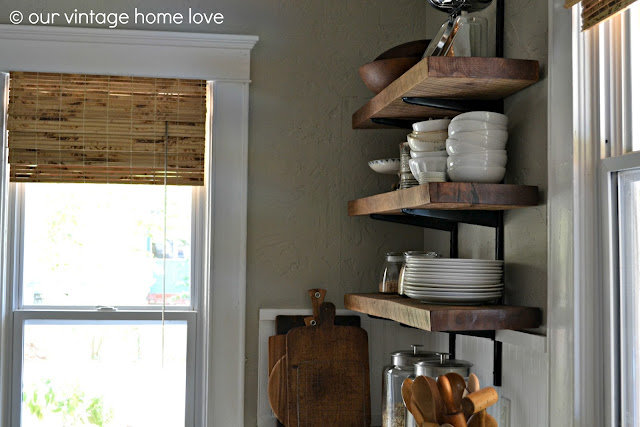 But that’s because I got in a rush, thought I could do it fast and without any help.
Boy was I wrong.
Live and learn, right?  🙂

For those wondering, the paint on the walls is called Light Gray by Farrow and Ball. 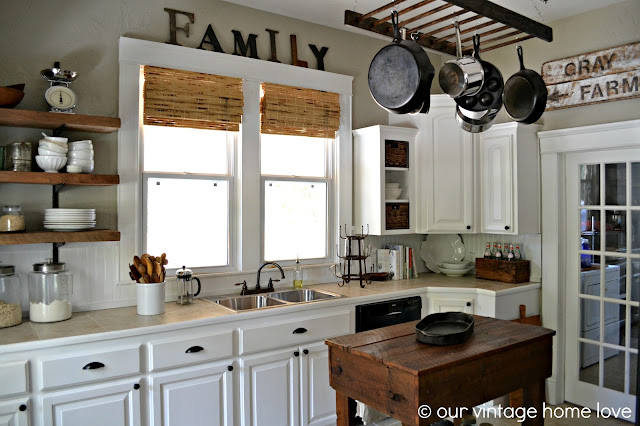 Beautiful villa with ethnic vibes on the Canary Islands

A couple of days ago I was out shopping and came across these gorgeous mums ...
By Haute
September 25, 2013

Hello!  Lots of changes going on in our house and so that meant finding a ...
By Haute
September 9, 2013