By Haute
Share
Hey there!  I’m back!  Thank you so much for all the lovely comments on our FB page.  The encouragement you gave me touched my heart.  Thank you.

I wanted to share with you the new bedding I purchased for our bed.  We’ve had the same bedding on our bed for about 10 years.  It was a duvet cover and shams that I made from two sheets as seen on our previous master bedroom photos.  It was perfectly fine, but it was time for something new, you know?  I have admired this ruffled, scrunched up bedding for a while and even considered making one myself, but decided against that tedious sewing project.  So, I was so excited when I found exactly what I wanted at Target.  I purchased the duvet cover and two shams for around $60, which I didn’t think was bad at all. It is so feminine and romantic.  Here’s a look….. 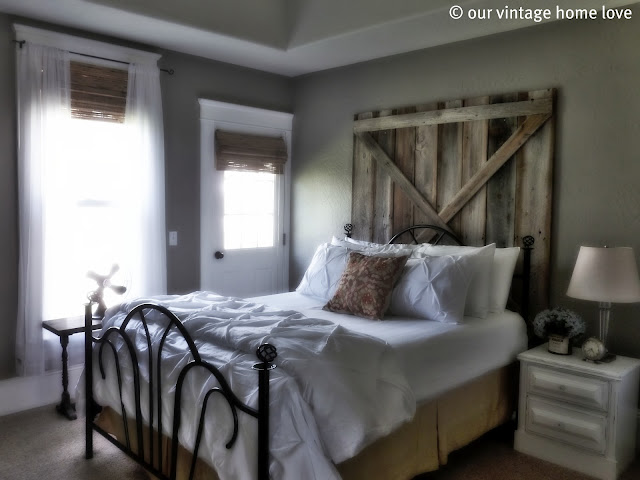 Love!!  I wanted to stick with white because I love the contrast between the white bedding and the rustic barn door behind the bed. 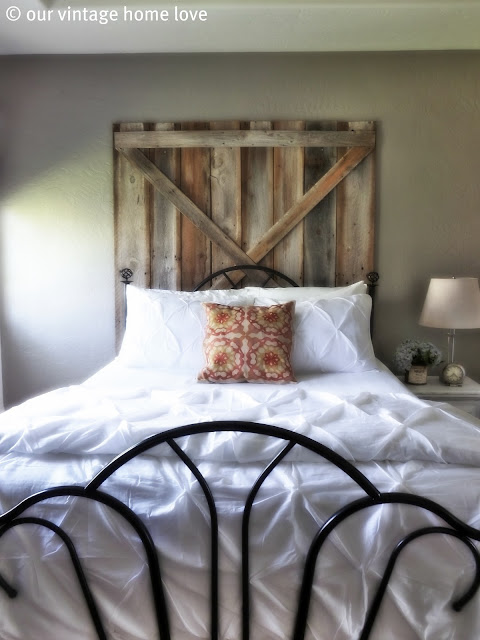 It’s simple and pretty, exactly the way I like our bedroom to feel.  Because of the close proximity to the outside door, we are limited to what we can have on that side of the bed, hence, no second bedside lamp and a tiny rattan storage box for a night stand.  We really like to open that door on warm summer evenings and let the breeze blow through. 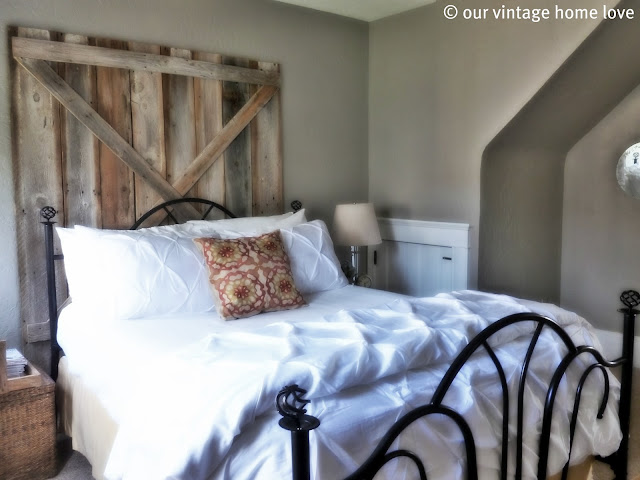 I can’t tell you how excited I was to find this bedding so I didn’t have to try sewing it myself.   The throw pillow is from West Elm, a gift from several years ago.  It had been in storage and I had forgotten about it, found it while looking for something else,
and thought it went perfectly with the white bedding.
What do you think?

So, I finally finished our stairs.  The second part of the project will be figuring out what to do with that awful half wall.  I don’t mind saying that I hate it.  It is a huge eye sore and I want it gone, however, we aren’t sure if it’s possible with a light switch right there at the front of it….I don’t do electrical and neither does hubby.  So, I’m trying to figure out what to do, if we can take it down, alter it somehow, or what.  I’d love to hear some suggestions from you!
Here’s a look at the stairs before I removed the icky carpet. 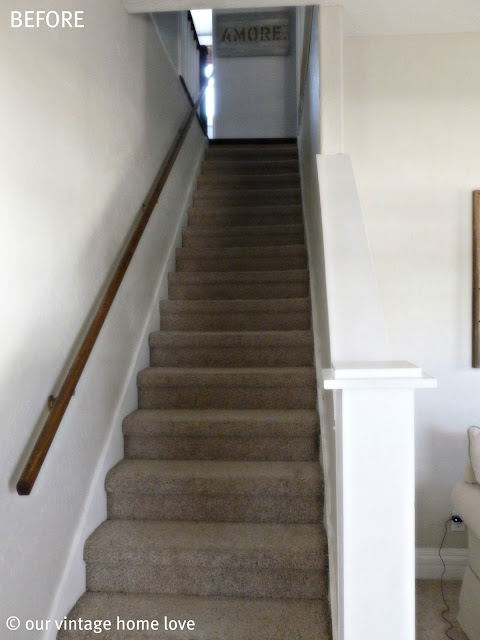 And here they are after removing the carpet and 4 billion staples.
A project I never want to ever do again. 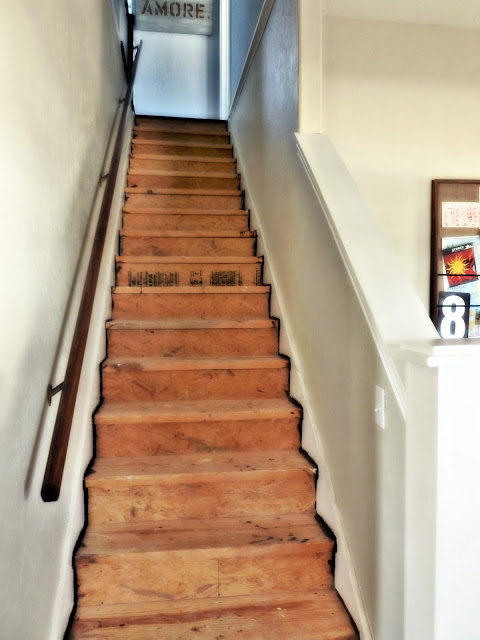 And after sanding, painting, staining and sealing. 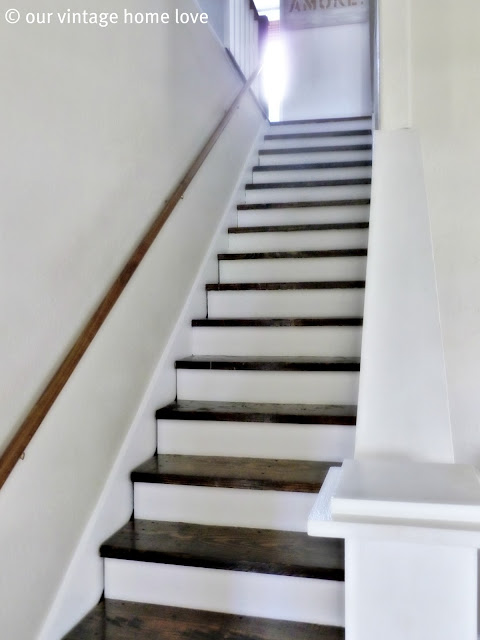 The stairs were covered in lots of paint spills from the painters who painted this house before we moved in so there was a lot of sanding involved.  Not fun, especially after suffering a bout with bronchitis and a torn rib muscle.  But, the stair portion is done, thank goodness and I’m pretty proud of it.  I didn’t want to do anything fancy or trendy.  Just classic and in keeping with the rest of our home.
I was thrilled with how the wood looked after removing all of the yuck on it. 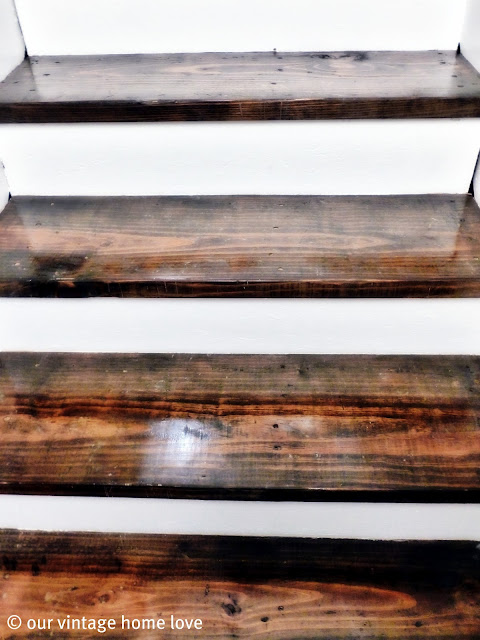 I stained it dark walnut and sealed with high gloss Varathane for floors. 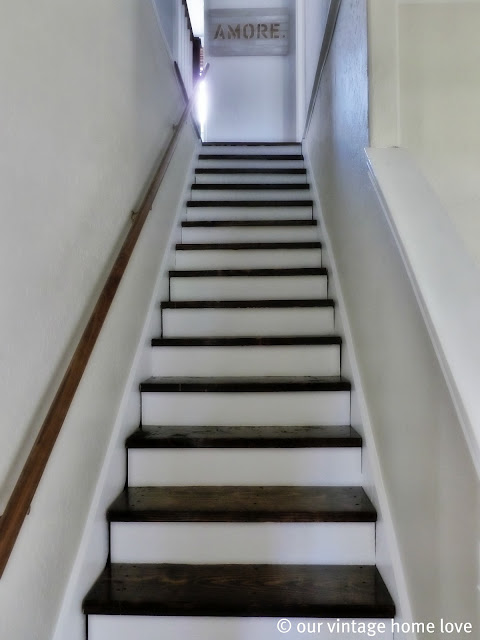 Now to start on the half wall redo/demolition/whatever!  What do ya think?
We originally wanted to use the giant barn beams hubby brought home, however, they are covered in some kind of oil that is nasty and not wanted in our home.
Would love to hear your ideas for the wall!

Have a great day y’all!